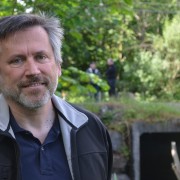 Tom Ostrom was the lead on the project for the Suquamish Tribe. He is pictured here, in front of the culvert, before its’ removal last summer.

Kitty Hawk Drive, just off Chico Way between Silverdale and Bremerton, WA was filled with work trucks and men in hard hats last summer. The relatively small, inconspicuous roadway was home to a stream culvert that was removed, thanks to the Suquamish Tribe’s cooperative efforts with local, state and federal officials.

Members of the Suquamish Tribe along with representatives from State, County and Federal regulatory agencies broke ground on the project on June 17, 2014.  Workers finished replacing the culvert with a bridge fall 2014, just in time for the early winter salmon runs in October and November.

Culverts are large cement tunnels that carry streams under roadways. The structures, used throughout the northwest during the last half of the twentieth century, create significantly faster running waterways that impede fish passage and damage creek beds.

Over the past several years the Suquamish Tribe has worked with government agencies and other organizations to remove the 40-foot culvert at Kitty Hawk Drive. The goal is to remove the even larger 400-foot culvert upstream under State Route 3 as well, resulting in a much healthier estuary at the mouth of Chico Creek.

Tom Ostrom, Salmon Recovery Coordinator in the Fisheries Department at the Suquamish Tribe, has been the lead on the project.

“The Washington State Department of Transportation has ranked the State Route 3 culvert as the second highest priority for replacement in the entire Olympia Region. Removing Kitty Hawk Drive from the historic Chico estuary is a necessary first step allowing for the future replacement of the State Route 3 culvert,” said Ostrom.
The Chico estuary is a diverse mix of habitats including stream and nearshore riparian, salt marsh, tidal distributary channels, and inter-tidal gravel beach. The Suquamish Tribe has documented juveniles of 5 species of Pacific salmon (including listed Chinook salmon and steelhead) rearing within the Chico estuary. In the early 1960s, the State Highway Department built State Route 3 and Kitty Hawk Drive on fill as deep as 50 feet, resulting in the loss of approximately 5 acres of channel, floodplain, and saltmarsh in the Chico Estuary.