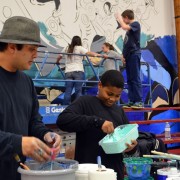 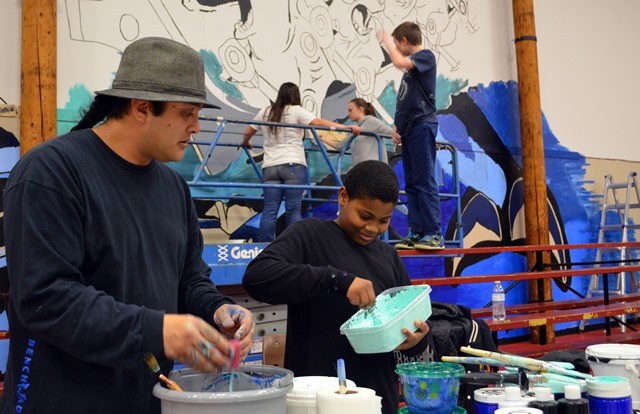 Oregon artist and Yakama Tribal Member Toma Villa has a unique approach to creating murals in Tribal Schools. He incorporates student learning into the process by working directly with Tribal youth to create the artwork. Work on the Chief Kitsap Academy Mural (CKA) began in January when Villa visited with students in a classroom setting. He spoke with them about art and later learned what images and shapes were important to them during a sketching workshop. The artist also met with family and community members during his initial visit, learning as much as he could about the Tribe and the school. Villa says inspiration for his initial sketch of the mural included stories he heard about orca visiting Suquamish Tribe journey participants in recent years. Salish designs and the CKA school mascot were also incorporated in the piece as a result of student sketches. In February, Villa returned to Suquamish with a complete rendering, and worked with students to create the 30-foot by 30- foot mural that now calls the CKA Gym home. CKA students and community members assisted Villa with the outline and fill to complete the mural in just 5 days. “It’s amazing, the students, staff and families are just thrilled with it,” said CKA Principal Fabian Castilleja. The CKA Mural Project was funded by the Suquamish Tribe Sports and Recreation Department, and spearheaded by Program Manager Kate Ahvakana. A time lapse video of the project is available on the Suquamish Tribe Facebook page at facebook.com/ suquamishtribe. More infomration about Toma Villa’s artwork, including murals, can be found online at tomavilla.com