Suquamish is one of 24 Treaty Tribes in the Puget Sound Area that co-manage shellfish resources with Washington Department of Fish and Wildlife  and is involved in a wide variety of activities to ensure the sustainable management of shellfish harvests and  protection of aquatic ecosystems. The Tribe employs professional biologists and technicians who actively manage a number of shellfish species that include bivalves (geoduck, intertidal clams, and oysters), crustaceans (crab and shrimp) and echinoderms (sea cucumbers and sea urchins) within the Tribe’s Usual & Accustomed harvesting areas. 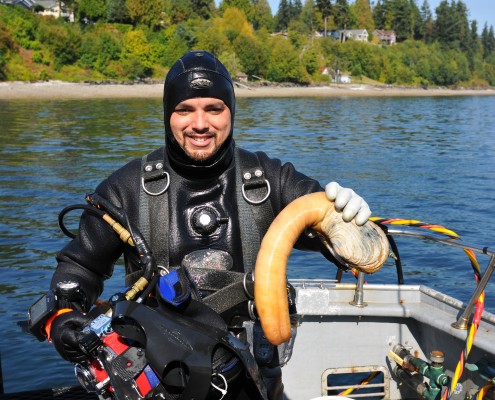 A Suquamish Diver harvesting geoduck off the shores of Agate Passage. 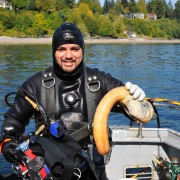 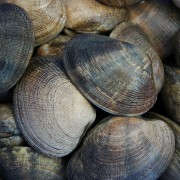 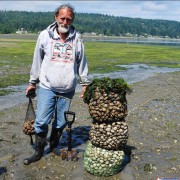 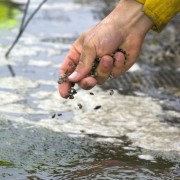 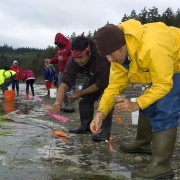 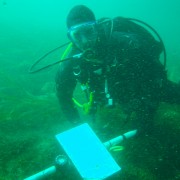 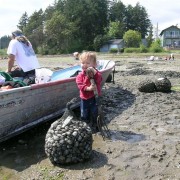 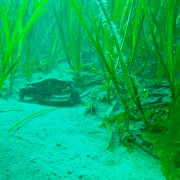 Finding ways to address pollution problems so that marine resources can thrive and are safe for wildlife and human consumption. more…

Contributing to shellfish research within Puget Sound, including our number one focus, the effects of Ocean Acidification. more…

Spearheading an array of outreach and education projects for K-12 and college that take students beyond the classroom. more…

Clam harvesting is a traditional activity that Suquamish Tribal Members have engaged in for thousands of years. Continuing the tradition in the modern day is a way for Tribe Members to stay connected with the culture inherited from Suquamish Ancestors. With profound respect for this cultural heritage, the Suquamish Tribe is committed to maintaining the health and productivity of these resources to ensure their availability for future generations.

Biomass Surveys
Every year from April through August, a Shellfish Survey Crew heads out to perform clam biomass surveys on beaches located within the Tribe’s U&A, with the exception of tidelands identified as staked and cultivated in the Shellfish Growers Settlement. Surveys are performed by trained Biologists and Technicians using a random systematic sampling protocol developed by the Washington Department of Fish and Wildlife and Puget Sound Tribes. Once the total biomass, in pounds, of a given species is estimated for a particular beach, the total allowable catch (TAC) is determined. The Tribes manage half of the TAC on private and public beaches, identified as the Treaty Share. It is customary to harvest the Treaty Share approximately every three years or 1/3 of this quantity every year.

Treaty Harvest
Currently, Manila and littleneck clams are the main species harvested commercially from the intertidal zone; however, all clam species can be harvested for ceremonies, subsistence or commerce. After the treaty share is determined, a harvest may or may not be planned depending on resource management strategies. Clam harvests happen during low tides, which typically occur at night from September to March and during the day from April to August. All harvests are opened under shellfish regulations according to the Shellfish Implementation Plan and are monitored by a Biologist or Technician and supervised by a Suquamish Fisheries Enforcement Officer. Washington Department of Health regulations are followed according to the federal court consent decree for shellfish sanitation.

Geoducks are harvested under water. Divers comb the floor of the Puget Sound for the large bivalve.

The Tribe harvests geoduck clams for commercial, ceremonial and subsistence purposes. Suquamish Seafoods Enterprises is the company responsible for sales and marketing while the Shellfish Program, part of the Suquamish Government’s Fisheries Department, is involved in conducting surveys, determining harvestable quotas and keeping harvest records. Successful management is the result of a symphony of hard work and use of the best available science and conservation practices.

Determining Commercial Geoduck Annual Quotas
Every year from April to October, a Suquamish Shellfish Program team of scuba divers swim miles of transects counting geoduck siphons or “shows”. Along with counts, random geoduck samples are weighed to estimate the biomass on each geoduck tract. The biomass from all tracts in each management region is calculated, and the annual harvest rate is set at 2.7% of the total biomass, referred to as the total allowable catch (TAC). Half of the TAC is managed by Tribes and the other by the State of Washington Department of Natural Resources (WDNR). Each geoduck tract is harvested down so that 35% of the pre-fishing biomass remains, and the tract is placed in recovery (no harvest) for several years until it reaches pre-fishing conditions again.

Management and Conservation Measures
The Suquamish Tribe co-manages geoduck resources in its Usual and Accustomed fishing grounds (U&A) to ensure that sensitive habitat is protected. Along with geoduck biomass surveys, Suquamish divers perform eelgrass bed surveys to determine their lowest depth range. When eelgrass is observed at a certain depth, specific harvest restrictions are implemented to protect this habitat. Finfish and particularly Pacific herring spawning populations can potentially be adversely affected by geoduck harvesting. Harvest on tracts that are located near areas of known herring aggregations and spawning activity is prohibited shallower than -35 feet between January 1 and April 15. Additional harvest and enforcement measures are required under Suquamish geoduck regulations to ensure resource conservation and habitat protection.

Suquamish fishermen and women actively participate in Dungeness crab and spot shrimp fisheries; sometimes traveling as far as the San Juan Islands when the season permits. These resources provide income and traditional foods for many Suquamish families. The Shellfish Program co-manages these resources with other Tribes and WDFW.

Species Management
The main Dungeness crab management principle is the 3S system; Season (harvest closed during the main molt periods), Sex (only males may be harvested) and Size (harvest of only legal males 61/4” and over). Pandalid shrimp species’ annual quotas are managed based on recent years’ fishery performances by looking at Catch per Unit Effort. Pre and post-harvest shrimp surveys are also conducted on specific stocks to assess any variability from year to year.
For crab and shrimp, annual quotas or harvest targets by region are agreed to by all parties prior to a new season opening and split equally between the State and Tribes. The Tribes and the State may have different management goals but must manage their respective fisheries within the established annual quotas. If during a season a population is considered reduced or more abundant than projected during the management period, all parties may examine available population data and discuss in-season quota adjustments.

Surveys Providing Input for Species Management
Suquamish Shellfish Program staff collects additional information that helps managers determine when these resources may be harvested. For many years, Suquamish staff has collected data on Dungeness crab shell condition to determine the main molt period in Central Puget Sound. Spot shrimp data on local populations is also collected by Suquamish and informs managers about the species’ life cycle stages, such as their ovigery state (egg bearing and egg deposition). Data is also collected as part of long term research goals such as the potential effects of changing water chemistry and physical parameters on crustacean life stages. These efforts are explained in more detail in the Research section.