Members of the Suquamish Tribe welcomed the newest member of the Suquamish Seafood Enterprises fleet in a dockside dedication ceremony Thursday morning.
The F/V Carriere will serve as the flagship for the Tribe’s geoduck harvesting operations.
“This is a really big great day, not just for our company and our divers, but for the Tribe and the community,” said Suquamish Seafood’s general manager Tony Forsman, opening up the dedication ceremony. “We have members who aren’t even born yet who will be using this boat. This is what takes us into the next generation in a safe, efficient and good way.”
The 49-foot aluminum dive boat is powered by twin diesel engines and is equipped with a suite of compressors that pump air to two divers at a time. Built by Lee Shore Boats in Port Angeles, the nearly $1 million vessel was paid for in part through a grant by the Native American Agricultural Fund.
The ship is named after Jeff Carriere, a living legend in the Suquamish diving community who has served as a diver, tender, and dive boat skipper across decades of work with the Tribe.
The name of the ship was unveiled during Thursday’s ceremony. Carriere, who did not know the ship was being named after him, was overcome with emotion as a crew member peeled away a mask to reveal the name. 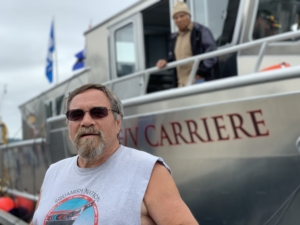 Carriere said he was overwhelmed with gratitude at the honor.
Carriere had helped design the new dive boat and was set to be its skipper before health issues forced an early retirement, said Jim Boure, Suquamish Seafoods Dive services manager. “His fingerprints are all over the design of this boat and now he’ll be with us every time we go out.”
Suquamish Seafood Enterprises, which is owned by the Suquamish Tribe, contracts Tribal divers to harvest geoduck from local waters. The business harvests and markets approximately 420,000 lbs. of wild geoduck each year.
Geoduck is a large clam considered a delicacy throughout much of Asia and is enjoying growing popularity in western markets.