Kitsap County Sheriff Gary Simpson and Suquamish Police Chief Mike Lasnier are pleased to announce that Kitsap County and the Suquamish Tribe have entered into an agreement to provide better and more efficient police services on the Port Madison Reservation. Effective July 1, 2017, Suquamish Police Officers will have state authority to:

The agreement is part of a new Memorandum of Understanding (MOU) between the Suquamish Tribe and Kitsap County, and fulfills the conditions of a Washington State statute that, upon request, requires county governments to enter into agreements with tribes when they share jurisdiction on an Indian reservation (RCW 10.92). The KCSO and SPD have worked together to provide law enforcement services on the Port Madison reservation for many years. However, depending on the type of land ownership and the Indian status of individuals, the rules for jurisdiction changed for each agency.

KCSO Lt. Jeffrey Menge pointed out that prior to the MOU a tribal officer had (and still has) the right to detain any person suspected of a crime and could investigate any crime on the reservation but they could not make any formal arrests or transports under state law. This will now change. An example of this new collaboration can be illustrated with a common DUI Investigation. In the past, a tribal officer had the ability to stop and detain a person suspected of DUI on the reservation but once they determined the suspect was “non-Indian”, the officer was required to stop and wait for a KCSO Deputy or State Trooper to respond and finish the investigation. Under the MOU, the Suquamish officer can now complete the entire investigation under state authority, including arrest and transport to the jail, thus eliminating the need to tie up other officers and duplicate efforts. 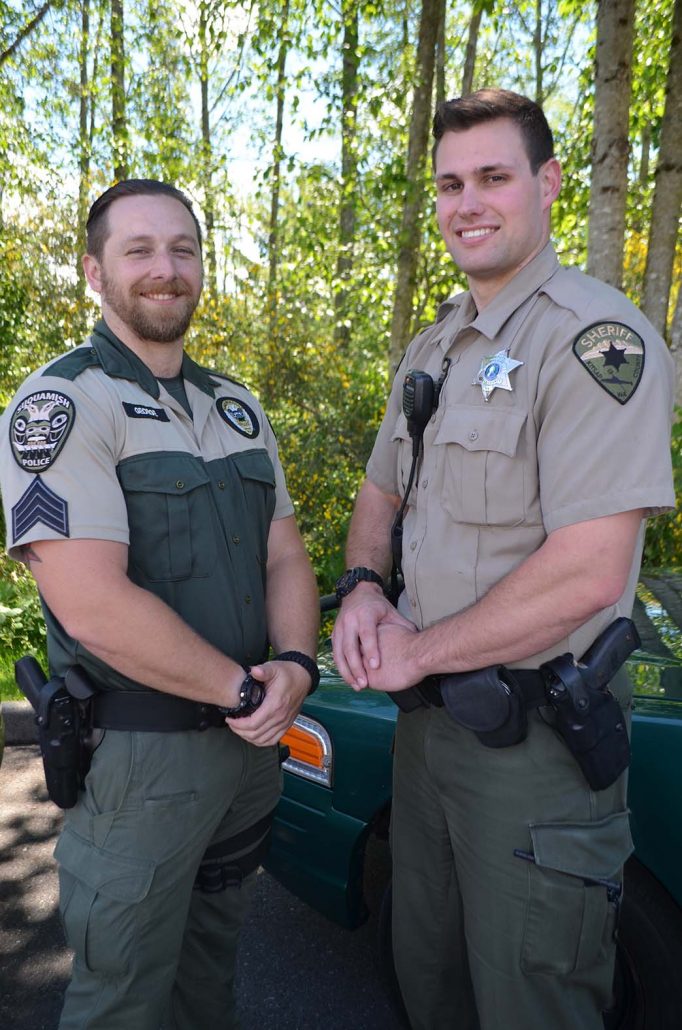 “It doesn’t take two cops to do the work of one cop. Tribal officers and citizens have been stuck on the side of the road awaiting the arrival of a Deputy, who in many cases was pulled away from a more serious investigation to come handle a minor offense. It gets worse; two officers now have to write reports, receive subpoenas and will have to go to court at substantial cost to two different governments. These are low level cases; traffic violations and misdemeanor property crimes. We want our deputies out there catching burglars and heroin dealers, not driving 20 minutes to write a suspended driver a citation we could have issued in 90 seconds,” said Suquamish Police Chief Mike Lasnier.

Sheriff Gary Simpson credits a good working relationship between Kitsap County and the Suquamish Tribe for making the MOU a reality. “Our already collaborative and cooperative working relationship made this process as easy as it could have been, given its complexity.” Simpson said, “In many ways, this agreement memorializes an already fantastic working relationship.”
Sheriff Simpson added that the end result of the complex process is “a more effective and efficient public safety response for all citizens on the Port Madison Reservation and surrounding communities.”

Kitsap County Sherriff will be hosting an open house for those who want to know more at 5:30 p.m. on June 22, 2017 at the Suquamish United Church of Christ, 18732 Division Ave. NE, Suquamish, WA 98392.  For more information on the interlocal agreement, check out our Suquamish Police Frequently Asked Questions Page or download a printable brochure by clicking here.

New Suquamish Museum Exhibit- We Are The Ancestors
Scroll to top