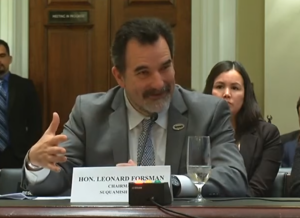 Washington State’s Native American Voting Rights Act is a model the rest of the United States should follow as the 2020 election season begins. This is the message brought to Washington, DC by Leonard Forsman, Chairman of the Suquamish Tribe and President of the Affiliated Tribe of Northwest Indians.

Forsman testified today before the Elections Subcommittee of the Committee on House Administration at a hearing entitled “Native American Voting Rights: Exploring Barriers and Solutions.” The hearing took place at the Longworth House Office Building.

Forsman described the many barriers to voting facing Native people across the United States.

Among them, jurisdictions that refuse to accept Tribal IDs for those registering to vote. Some tribal citizens also lack the type of home addresses that correlate with the standard address system. Instead, many use PO Boxes or other addresses not accepted for establishing residency.

A third barrier is the locations of ballot drop boxes that are often outside of reservation boundaries and available only for limited hours. “This created a hardship for many tribal citizens that do not have means of transportation,” said Forsman.

“Since the passage of NAVRA, tribes in Washington are now partners with the State,” Forsman said. “The Suquamish Tribe is now able to have direct involvement with the state in planning and ensuring that our people do not face obstacles while exercising their right to vote.”

Forsman, who is also a member of the Executive Board for the National Congress of American Indians, noted NCAI strongly favors legislation such as HR 1694, the Native American Voting Rights Act of 2019, to remove voting barriers.