Suquamish Tribe leaders welcomed Seattle Mayor Bruce Harrell to the Port Madison Indian Reservation today to discuss a range of issues of mutual interest. This was Harrell’s first visit to an Indian reservation since assuming office in January.

The visit, hosted by Suquamish Chairman Leonard Forsman, began at the Suquamish Cemetery, where Mayor Harrell paid his respects at the gravesite of Chief Seattle. The cemetery is located on a hilltop overlooking the Salish Sea and the city that bears Seattle’s name.

Chairman Forsman provided an overview of Suquamish history and Chief Seattle’s role in shaping the modern Suquamish Tribe. Chief Seattle was leader of both the Suquamish and Duwamish people, and was the first to sign the 1855 Treaty of Point Elliott that, in exchange for vast land holdings, secured the rights — and reserved the sovereignty — of many of the tribes in this area, said Chairman Forsman.

“I want to thank the Suquamish Tribe for hosting me today,” said Mayor Harrell. “Visiting the gravesite of the namesake of our city, Chief Seattle, was a powerful opportunity to reflect both on our region’s past and on our shared vision for the future. I look forward to working with tribal leadership to advance our common efforts to strengthen our environment, collaborate on solutions for our communities, and build a thriving region for all.” 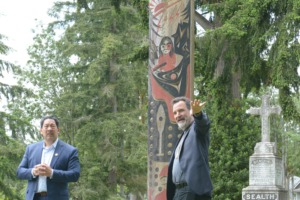 “We appreciate the opportunity to host Mayor Harrell and to strengthen our government-to-government ties with the city named after our ancestor,” said Chairman Forsman during the visit.

“The Suquamish Tribe’s commitment to the wellbeing of the people and the region spans generations,” Chairman Forsman said. “Collaboration with the city of Seattle can help protect the marine ecosystems we share and support collaboration among the diverse Native and non-Native communities of our region.”

Government to government relationship a priority 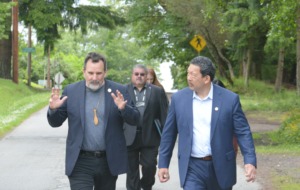 Tribal leaders shared their concerns about the plight of homeless Native people in Seattle, and discussed new housing resources now in development.

They also discussed with the mayor the impacts of marine traffic on endangered salmon and orca, and the importance of protecting treaty fishing rights in Elliott Bay and the lower Duwamish River.

Chairman Forsman serves on the Seattle Waterfront Steering Committee, and the Suquamish Tribe and other area tribes are collaborating on public art along the waterfront and envisioning areas for Tribal events.

The wide-ranging discussion underscored the importance of the longstanding government-to-government relationship between the City of Seattle and the Suquamish Tribe.

Mayor Harrell asked the Suquamish leaders for their perspective on the question of the Duwamish Tribal Organization’s (DTO) recent push for federal recognition.

Chairman Forsman explained that the DTO represents a small group of Duwamish descendants; many more Duwamish people are citizens of the Suquamish and other area tribes where they enjoy the full benefits of federal recognition, including treaty rights, educational and health benefits, and the right to elect their leaders and run for office. 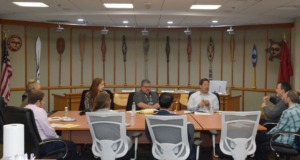 The DTOs efforts to win federal recognition became a concern when they turned to members of Congress in a bid to win recognition through a political process after efforts via the Department of Interior had failed. The Department of Interior found that DTO had not maintained a continuity of government during the 20th Century and therefore did not meet the basic requirements for federal recognition.

The DTO claim on their website that, “We are the host tribe for Seattle, our area’s only indigenous tribe” is inaccurate and divisive, lacking the inclusiveness that has been the hallmark of the tribes that have welcomed in so many Duwamish people, according to Chairman Forsman.

A series of advertisements by other area tribes and an editorial by the Suquamish Tribal Council dispute this DTO claim.