The new policy and the Commissioner’s move to end aquatic leases at Hope Island in Skagit Bay and Rich Passage near Bainbridge Island signal the end of fish farming in Puget Sound by Cooke Aquaculture, five years after the catastrophic collapse of Cooke’s fish farm at Cypress Island and the release of 250,000 non-native Atlantic Salmon into Salish Sea waters. Cooke Aquaculture was fined $332,000 following the incident and cited for inadequate maintenance and poor monitoring of conditions. 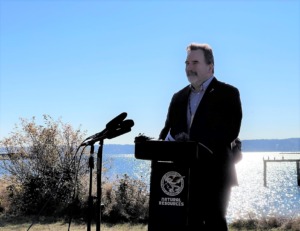 “On behalf of the Suquamish people, I want to thank Commissioner Franz for listening to Tribes and others who place the health of the Salish Sea as their top priority.” said Leonard Forsman, Chairman of the Suquamish Tribe. “Ending commercial finfish farming in our ancestral waters is an important step towards protecting marine water quality, salmon populations, and the endangered Southern Resident Killer Whales. The impacts of commercial finfish farming put all of that at risk, and threatened treaty rights and ultimately our way of life and culture.”

Before and especially since the Cypress Island disaster, the Suquamish Tribe has consistently advocated for the end of all commercial finfish farming in Puget Sound, whether for native or non-native finfish. In 2018, the Washington State legislature banned the commercial farming of non-native fish, prompting Cooke Aquaculture to seek and receive permits from the Washington Department of Fish and Wildlife and the Washington State Department of Ecology to switch to the farming of native steelhead at its Hope Island and Rich Passage facilities. The Suquamish Tribe opposed those permits and has since communicated it strong opposition to all commercial finfish operations in Puget Sound to state leaders, including Commissioner Franz.

“This is a big victory for everyone who values the Puget Sound ecosystem,” Forsman said. “This action eliminates a harmful impact in our ancestral waters. The Rich Passage net pens have long been a threat to our salmon fisheries, both through their threats to our genetic stocks, the pollution associated with their care and feeding, and the physical obstruction to our treaty fishers.  They have blocked and polluted our fishing grounds for too long, and we are relieved to know they will be removed, restoring our waters back to a more natural state.”

Commercial fish farming operations pose numerous environmental risks to the marine waters of Puget Sound. Because their operations are year-round, commercial finfish farming results in the constant release of chemicals, medicines, food and fish waste into the marine environment, resulting in impacts to the seafloor, water quality, and habitat. Releases like the one at Cypress Island, also put at risk the health and genetics of local, native finfish. The move towards commercial finish farming of steelhead posed an especially dangerous risk to the small native steelhead population on the Kitsap Peninsula.

Year-around net pen farming operations also attract species, such as seals and sea lions, in numbers that likely increase predation on local salmon populations as they migrate to and from spawning and rearing habitat in local streams.