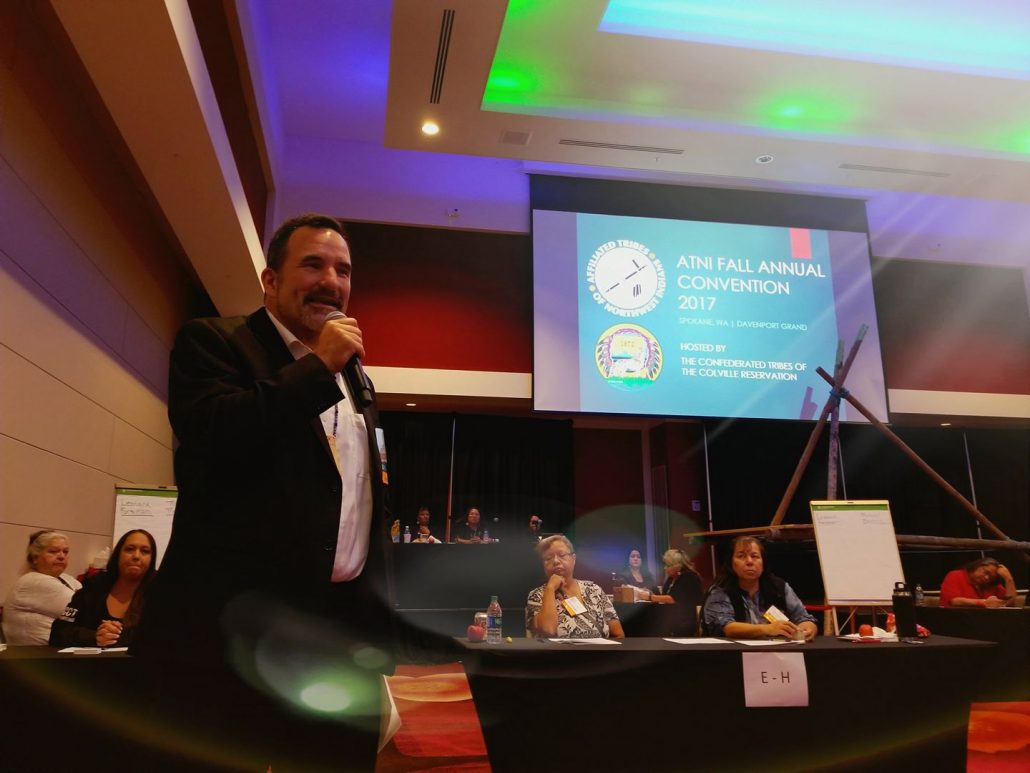 SUQUAMISH, WA- The Affiliated Tribes of Northwest Indians (ATNI) Executive Board has a new president. Suquamish Tribal Chairman Leonard Forsman was elected to the position in a close race against fellow ATNI member and Confederated Tribes of the Colville Chairman Mike Marchand.
“I am honored and humbled to be elected ATNI President. ATNI has a legendary reputation as an intertribal organization that is committed to preserving culture, language, fishing and wildlife habitat, and healthy tribal communities. I look forward to leading our organization in continuing to fulfill its mission to advocate for the tribal rights reserved through treaties, executive orders and other agreements. The Tribes of the Northwest are committed to protecting their homelands and their ancient way of life and I will work hard to help accomplish this sacred duty,” said Forsman.
Forsman was elected September 20, 2017 during the ATNI Fall Annual Convention at The Davenport Grand in Spokane, WA. He replaces President of the Quinault Indian Nation Fawn Sharp, who held the position for 2 terms and did not seek re-election.
“The current climate in Washington D.C. requires us to remain vigilant in our efforts to protect our sovereignty, hunting and fishing rights, health care, education, veterans, sacred places and natural resources from budget cuts and policies and regulatory changes that violate the trust responsibility. We must also work with our allies to protect our housing and economic development programs and initiatives,” added Forsman.
Forsman, a 20-year Tribal Government veteran, is a well-known consensus builder in Indian Country, serving as the Co-chair for the Tribal Leaders Congress on Education, Vice President of the Washington Indian Gaming Association and Vice President of the Federal Advisory Council on Historic Preservation along with several other intergovernmental committees and organizations.
“Leonard is a dear friend and champion not only for the Suquamish Tribe, but for all of Indian Country. I know that he will serve all the Northwest Tribes and will represent our interests across the country. I am grateful for his leadership and look forward to working with him as ATNI President,” said National Congress of American Indian (NCAI) President and Swinomish Tribal Chairman Brian Cladoosby.
The ANTI Executive Board is made up of 7 positions, with elected officers serving staggered 3-year terms. In addition to Forsman, ATNI Member Tribes also re-elected Theresa Sheldon of Tulalip as 2nd Vice President and Taylor Aalvik of Cowlitz as Assistant Secretary this year.
About Leonard Forsman
Leonard Forsman is Chairman of the Suquamish Tribe, a position he has held since 2005. Previously, he was a research archaeologist for Larson Anthropological/Archaeological Services in Seattle, Washington from 1992 to 2003. From 1984 to 1990, he was Director of the Suquamish Museum in Suquamish, WA, and has served on the Museum Board of Directors since 2010. His experience and expertise earned him a federal appointment to the Advisory Council on Historic Preservation, of which he is now vice-chair, where he assists in promoting the preservation, enhancement and productive use of the nation’s historic resources. In addition, Forsman has held the position of Vice President at the Washington Indian Gaming Association since 2005. He has also been a member of the Washington State Historical Society Board since 2007, the Suquamish Tribal Cultural Cooperative Committee since 2006, and the Tribal Leaders Congress on Education since 2005. Forsman received a B.A. in Anthropology from the University of Washington and an M.A. in Historic Preservation from Goucher College.
About ATNI
Formed in 1953, ATNI represents 57 Northwest tribal governments in from Washington, Oregon, Idaho, Northern California, Southeast Alaska and Western Montana. The organization provides a forum for sharing information on matters of interest to its member Tribes allowing them to develop consensus on matters of mutual importance, and assists member Tribes in their governmental and programmatic development consistent with the goals of self-determination and self-sufficiency, and provides for effective public relations and education programs with non-Indian communities. Through its conferences, forums, networks and alliances, it is the intent of ATNI to represent and advocate for the interests of its member Tribes to national Indian and non-Indian organizations and governments. For more information about ATNI or to obtain an agenda of events, visit them online at www.atnitribes.org

Wrapped in Resilience 2017
Scroll to top